Physical and chemical processes over the Aegean Sea during Etesians: Outcomes and impacts from EUFAR Transnational Access

Four research flight campaigns took place in the Aegean Sea (AS) during late summer and early autumn 2011. Two of these were supported by EUFAR Transnational Access with funding from EC Framework Program 7. These were AEGEAN-GAME (AEGEAN Pollution: Gaseous and Aerosol airborne MEasurements) and ACEMED headed by lead scientist Vassilis Amiridis. In CIMS headed by lead scientist Carl Percival with UK funding, and CarbonExp headed by lead scientist Dirk Schuettemeyer and supported by ESA. The AEGEAN-GAME project together with CIMS undertook 4 flights in total that passed over the AS (on 1, 4, and 7 September). Measurements were performed with the FAAM BAe-146 research aircraft from the UK which was the main measurement platform for AEGEAN-GAME.  In particular, it was equipped with a suite of instruments for measuring a number of meteorological parameters, the concentrations of gaseous species, as well as the physical properties and chemical composition of atmospheric particles (https://www.faam.ac.uk/the-aircraft/instrumentation/). In addition, three more instruments were installed and operated by the University of Manchester; an Aerodyne compact Time-of-Flight Aerosol Mass Spectrometer (cToF-AMS) for the high time-resolution measurements of the chemical composition of the particles (organic matter, sulfate, nitrate, ammonium and chloride ions; see Fig. 1), a Scanning Mobility Particle Sizer (SMPS) and the Chemical Ionization Mass Spectrometer (CIMS). The airborne measurements were supported by ground observations at Finokalia (Crete) and at Vigla (Lemnos).

The main objective of AEGEAN-GAME was to map the marine atmospheric boundary layer (MABL) structure, atmospheric turbulence and air quality over the whole AS and to identify the link between atmospheric chemical composition and atmospheric processes during an Etesian outbreak. The campaign took place towards the end of the usual period of the Etesian winds; nevertheless, the planning for the clustering of four separate campaigns extended the time period available to each of them. For AEGEAN-GAME, this gave the opportunity to meet weather conditions representative of two distinct Etesian flow patterns (medium and long-range transport conditions). The aircraft took off from Chania (Crete) and continued anticlockwise to the north of the AS over the island of Lemnos (cf. Fig. 1). The flights (duration of ca. 4-5 hours each) were of similar route covering the eastern and western parts of the AS. The flight paths consisted of long legs, near the surface at 150 m asl and above the MABL, with profiles up to 4.5 km asl. The fact that very low flights were not permitted by the Civil Aviation, as originally planned (~50m), resulted in the measurements being outside the MABL, causing deviation of the measured fluxes from the surface ones, in cases with strong stable conditions.

AEGEAN-GAME was a successful campaign in providing for the first time high time-resolution airborne measurements over the AS. The data obtained gave us the ability to meet several of our initial objectives and lead us to some new research topics. These outcomes are described in a number of peer-reviewed publications:

For us, the EUFAR Transnational Access facility was an unprecedented experience since for the first time we were actively involved in airborne measurements. The fact that we were able to be onboard the aircraft apart gave us an amazing experience and offered us the opportunity to get a more complete overview of the experiment that we had designed. We also enjoyed all the fruitful discussions that we had with the scientists who operated the instruments, despite the fact that we were initially mainly a modeling team.  The collaboration with the other groups that were active in parallel with AEGEAN-GAME expanded our research possibilities and knowledge but also created new scientific objectives/goals. For example, the closer interaction with the CIMS group gave us the chance to use the airborne hydrogen cyanide (HCN) observations as a tracer to identify the location and spatial extent of biomass burning (BB) plumes (Bossioli et al., 2016).

The whole experience helped us to understand thoroughly the airborne measurements, to analyze in depth our modeling results, and to evaluate them against the airborne observations. The AEGEAN-GAME dataset has been part of two MSc dissertations and two PhD theses, and was also the basis of a subsequent post-doctoral proposal. Given the significant equipment and experts offered by the EUFAR Transnational Access, the key to a successful campaign is to raise the scientific question and come up with an effective plan to approach it. We encourage similar small groups to imagine their own adventure, regardless of their previous experience with airborne measurements.

Next: Validation of TROPOMI tropospheric NO2 product based on APEX hyperspectral data: the S5PVAL-BE campaign in Belgium 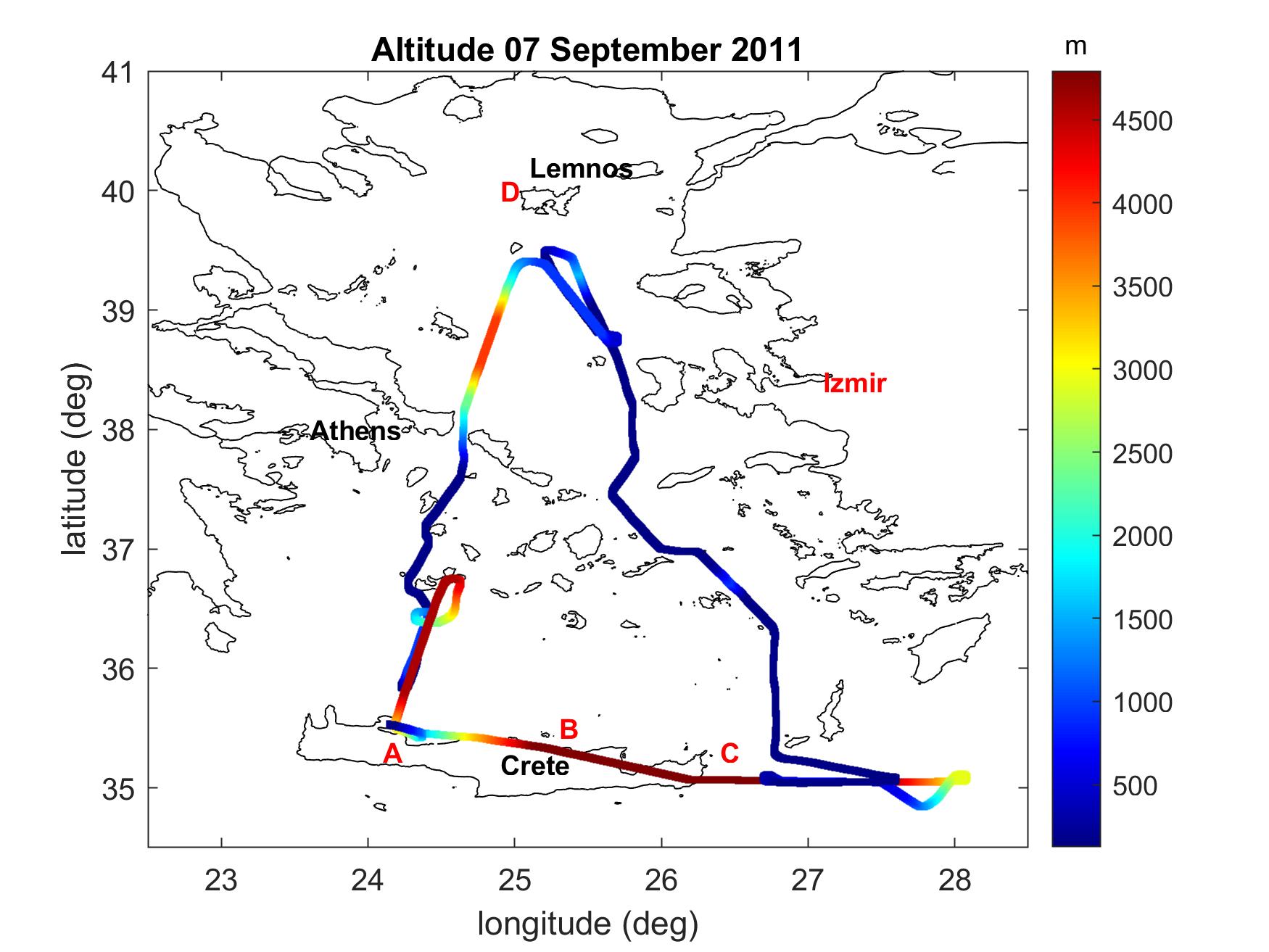 Trajectory for flight B643 on 7 September 2011. The color corresponds to the aircraft altitude in the scale at right. The sites at Chania, Crete (A), Finokalia station on Crete (B), maritime area between Crete and Karpathos (C) and Vigla station on Lemnos island (D), are indicated (Tombrou et al. 2015). 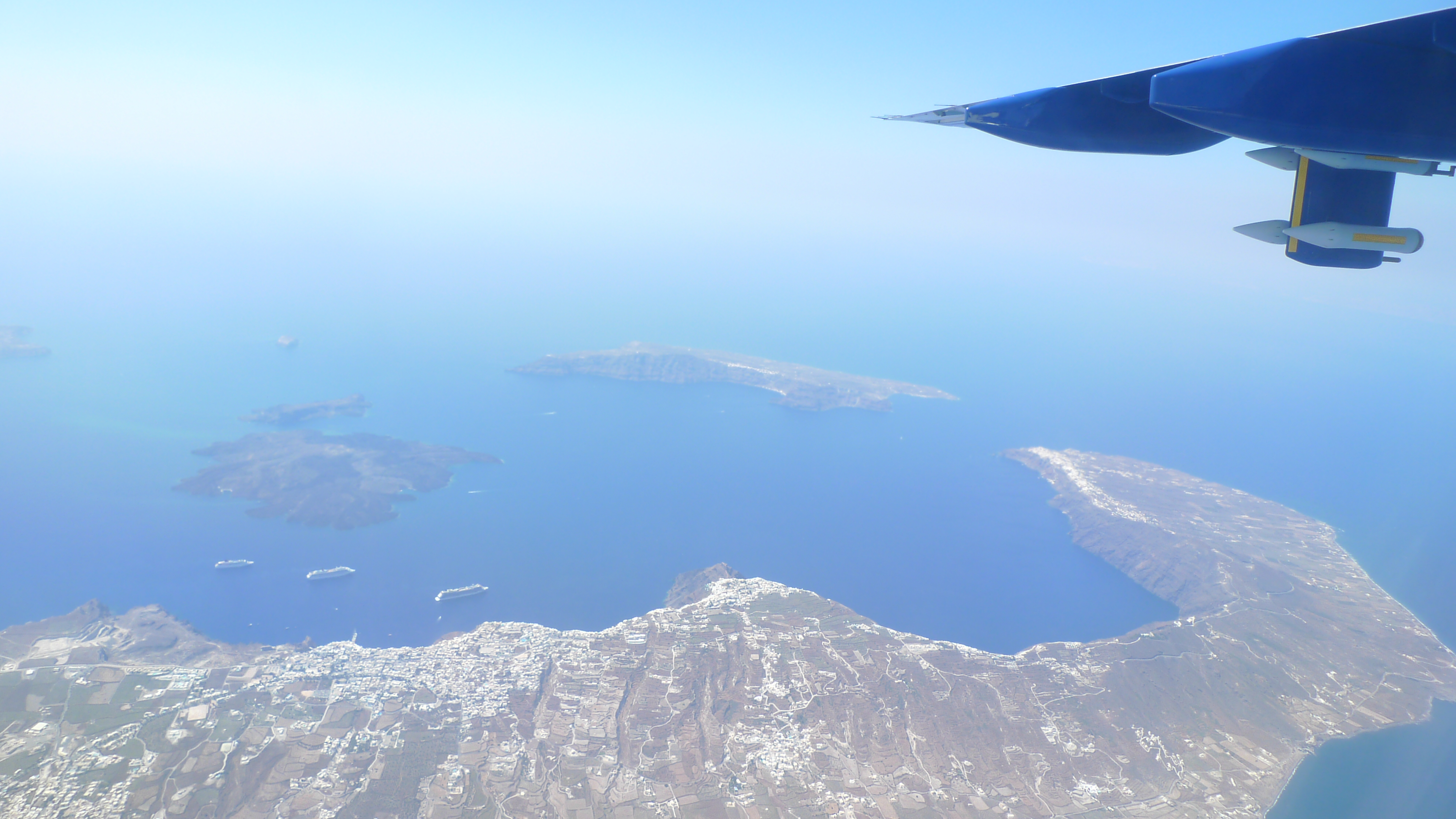 The Aegean Sea from above - a glance out of the FAAM’ aircraft's window. The underwing pylon carries some of the aerosol-sampling instruments. 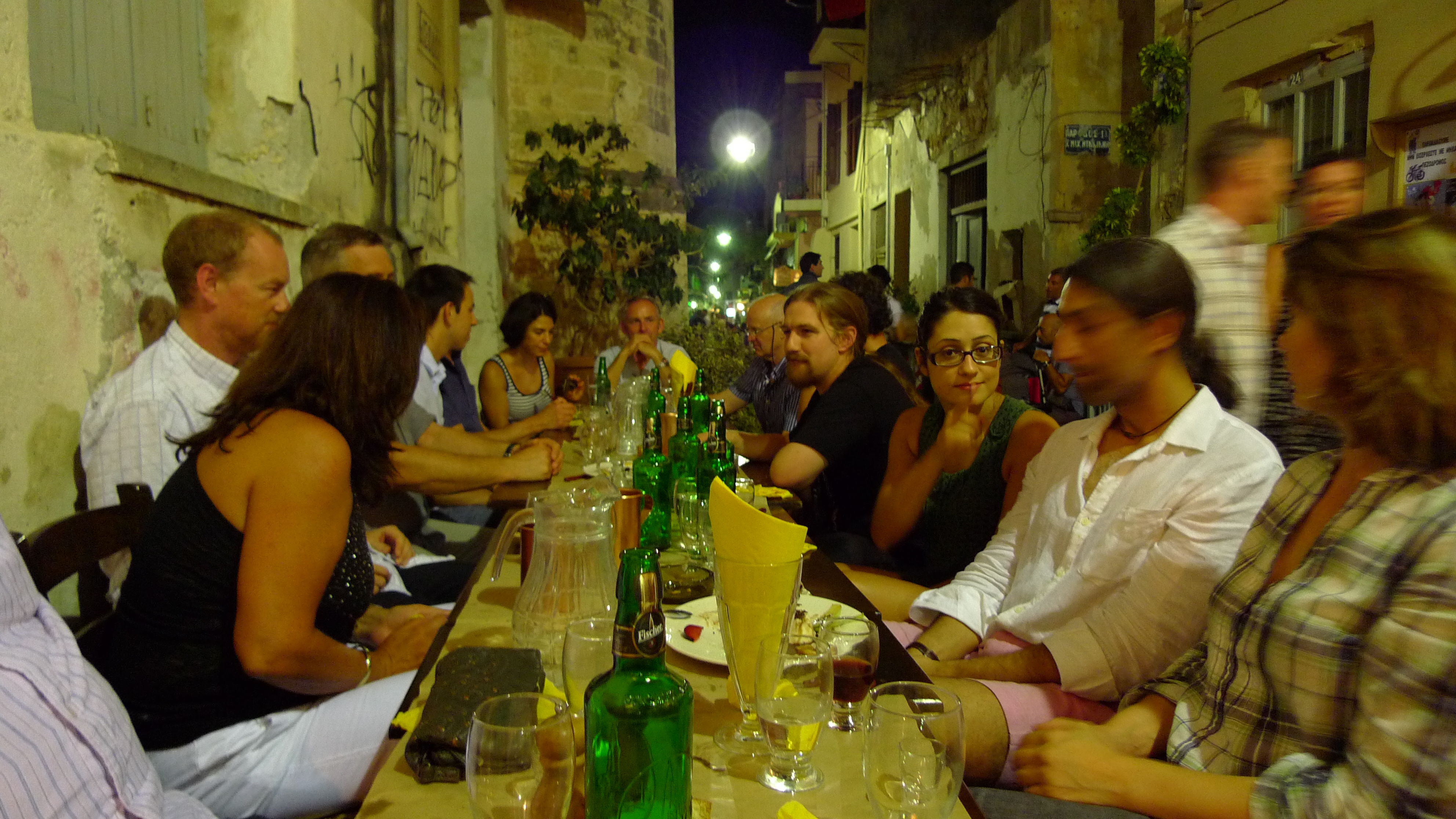 Chania, 4 September 2011. The scientific team after eight hours of flight .