Aircraft measurements of air quality in the UK

The Atmospheric Survey Aircraft (ASA) is a modified Cessna 421 operated by the Met Office in association with Alto Aerospace and based at Bournemouth, UK. Its original mission was to be on standby to monitor volcanic ash in UK airspace. With funding from the UK Strategic Priorities Fund (SPF) it was modified with additional instrumentation to make regular air quality measurements with the primary objective to measure pollution in the lower atmosphere. A new contract to fly at least 50 hours (approximately 15 sorties) over the coming 8 months has just been signed. For more information on the SPF Clean Air activity visit this link.

The ASA was originally instrumented to measure volcanic emissions; major activity during the first half of 2019 by Observation-Based Research (OBR) team members added additional science instrumentation to enable air quality observations. The OBR team designed, built and installed a range of new sensor systems aboard the aircraft. These include sensors that measure the size of small aerosol particles (PM10/PM2.5) from scattering of laser radiation, and the concentration of nitrogen dioxide gas from the absorption of light within a compact cell, where mirrors one thousand times more reflective than those in an average bathroom are used to achieve optical path lengths through the sample of tens of kilometres. Additional instruments on the aircraft measure sulphur dioxide, ozone and aerosol optical absorption

Where do we fly?

With a duration of up to 4 hours, the ASA’s normal operational area ranges over the southern half of the UK. Survey routes have been developed that overfly many Automatic Urban Rural Network (AURN) ground-based monitoring sites. These sites form part of the UK’s largest automatic air quality monitoring network and are located at both roadside and rural sites (DEFRA AURN Website).

During the period July 2019 – March 2020, the aircraft flew 24 sorties, mainly around the southwest UK survey route taking in several AURN sites in the region. The Alto Aerospace pilots do their best to fly as low as the rather congested UK airspace allows, down to 500 feet above ground level where possible. Several city-flux sorties (sampling both upwind and downwind of a large urban area) have also been flown around London during this time, monitoring nitrogen dioxide, ozone and PM10/PM2.5 aerosol as the city was circumnavigated, with missed approaches at smaller airfields to sample pollution right down to the surface.

Flying during the new contract period will see more focus on the central/eastern England survey route, again overflying a number of AURN sites. A south coast survey route, extending from Exeter eastwards all the way to Beachy Head, will also be flown during meteorological conditions where pollution is being advected northwards from the continent.

Aircraft data – what we do with it and who will use it?

A quality assurance process, developed by the OBR team, will deliver datasets that include all measured species and meteorological variables from Clean Air aircraft sorties, geolocated and provided in standard format (NetCDF) with metadata. Quality control is paramount to the success of the project, with strong focus on aircraft instrument calibration, maintenance and traceability.

Processed and quality-controlled data will be available for use by both Met Office and external groups. It will primarily be used for evaluation of air quality models, particularly with respect to assessing how well these models represent the vertical distribution of pollutants. This work is already underway in the Met Office Atmospheric Dispersion and Air Quality (ADAQ) team. Existing data is being used to optimise plans for future flights (e.g. flight levels and patterns) in order to allow for best interfacing of data with the AQUM (Atmsopheric Quality in the Unified Model) model output.

If you are interested in learning more about the Clean Air project and/or work of the ASA aircraft, please feel free to contact Justin Langridge, Head of Observation Based Research. 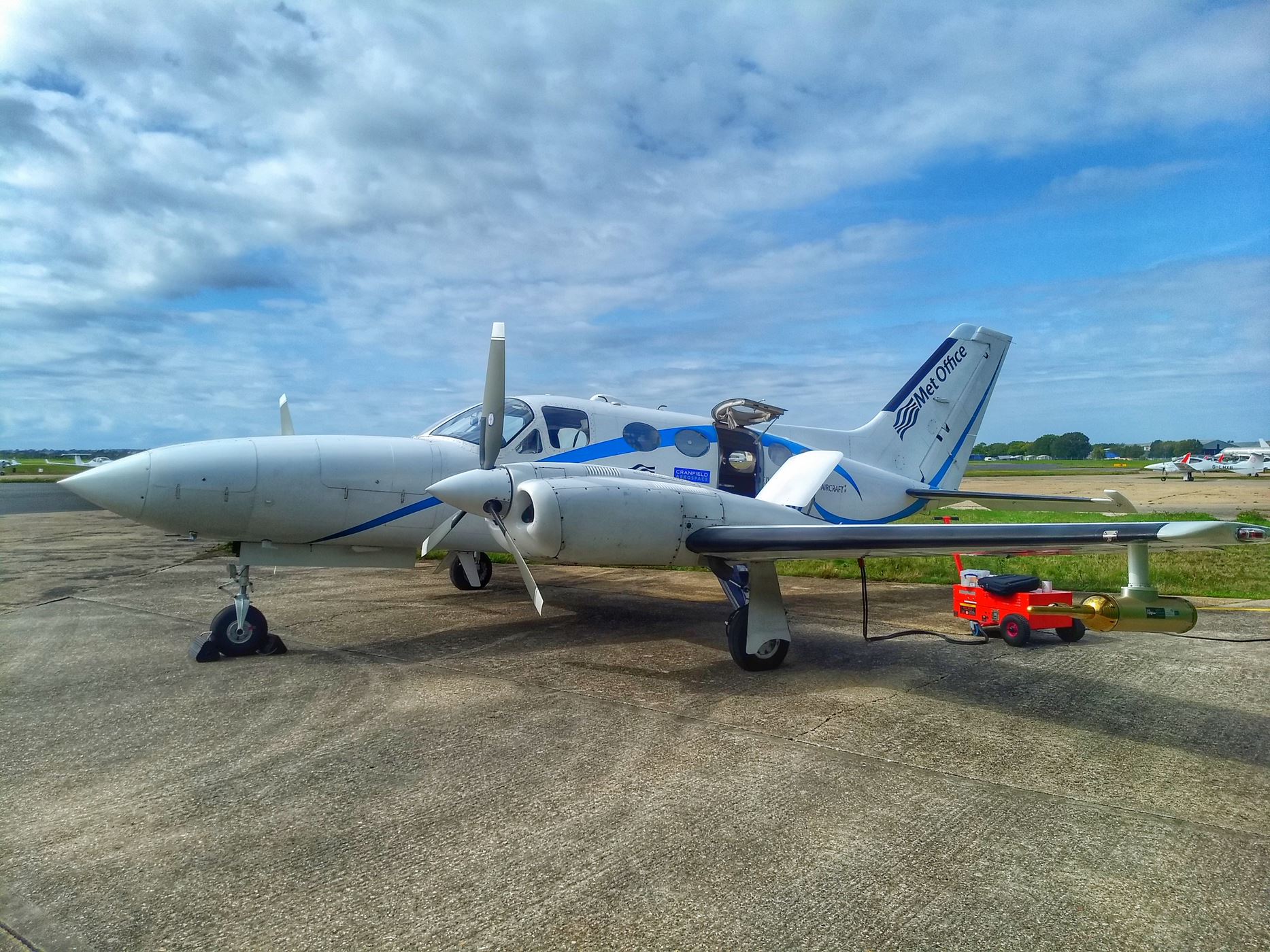 The ASA Cessna 421 aircraft on the ground at Bournemouth Airport 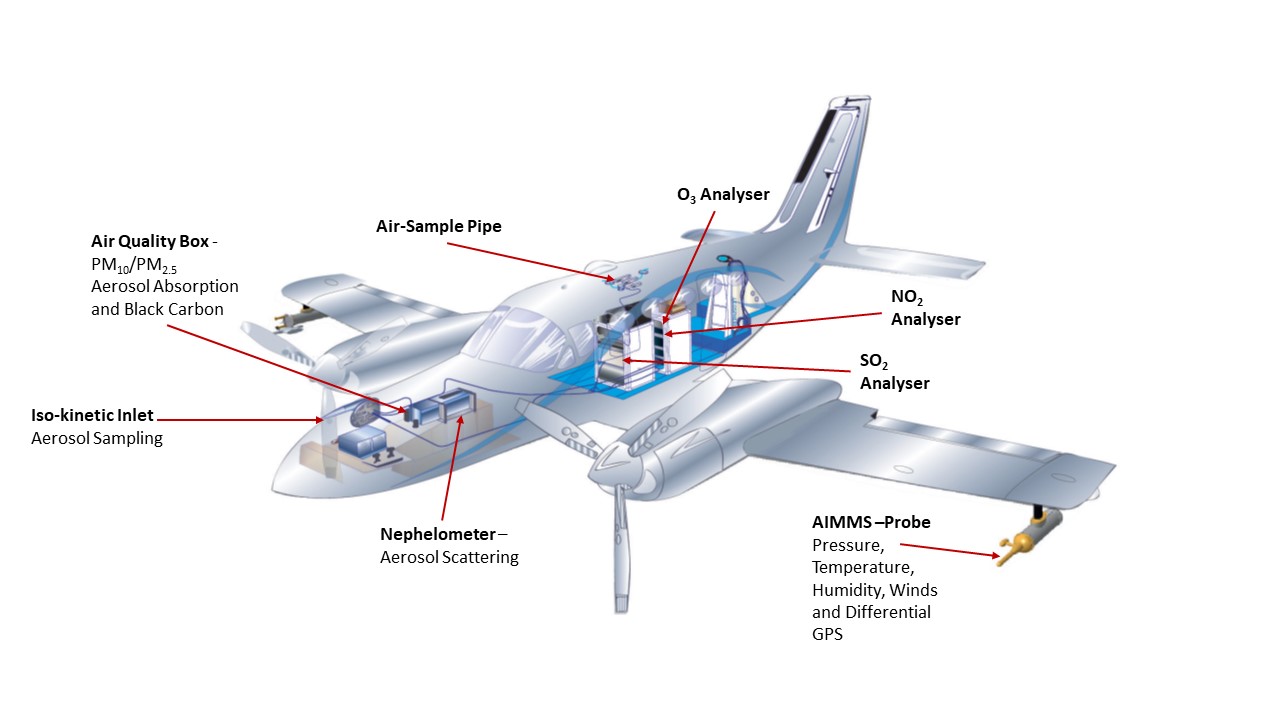 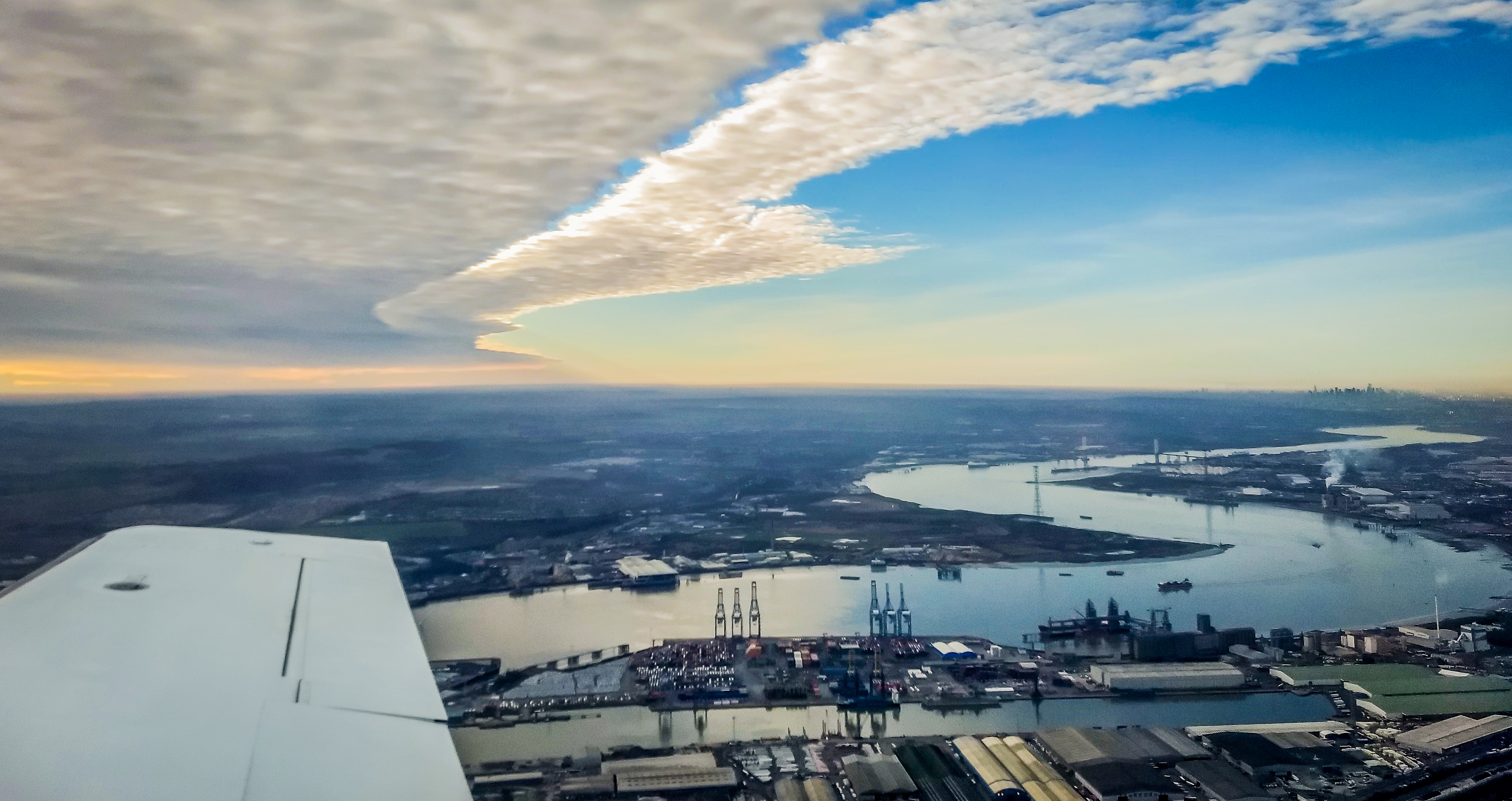 ASA at low altitude over the east of London