In March 2020, the Met Office was planning to undertake the Arctic Cold Air Outbreak (ACAO) airborne field campaign. However, the onset of the Covid pandemic lead to its postponement, initially for one year but subsequently for two. Whilst the original delay was an unwelcome interruption to the Met Office's research objectives, the delays have enabled the campaign to be more closely-coordinated with other airborne campaigns taking place in the region in a way that will benefit all of the participating scientific teams.

ACAO will now take place in March 2022 and will operate the FAAM BAe-146 aircraft out of Kiruna, Sweden. In addition to the Met Office, scientists from the Universities of Manchester and Leeds will participate in the campaign.The key goal of the campaign is to make novel in-situ airborne measurements of the evolution of cold-air outbreaks (CAOs), in terms of the meteorology, atmospheric composition and clouds, from the Marginal Ice Zone (MIZ) to Scandinavia (see figures).

Representing the processes important for the formation and evolution of these mixed-phase clouds in models is extremely challenging, yet acutely important for the radiation budget of mid- and high-latitude clouds. Close co-ordination between ACAO flights and four other research aircraft that are scheduled to operate in the region at the same time, with complimentary scientific objectives, presents a unique opportunity to collect a more comprehensive dataset. This will be used to evaluate and develop improvements to the representation of mixed-phase clouds in the Unified Model that is used by the Met Office for operational Numerical Weather Prediction and climate simulations.You can read more about the other partcipating aircraft activities in this article. 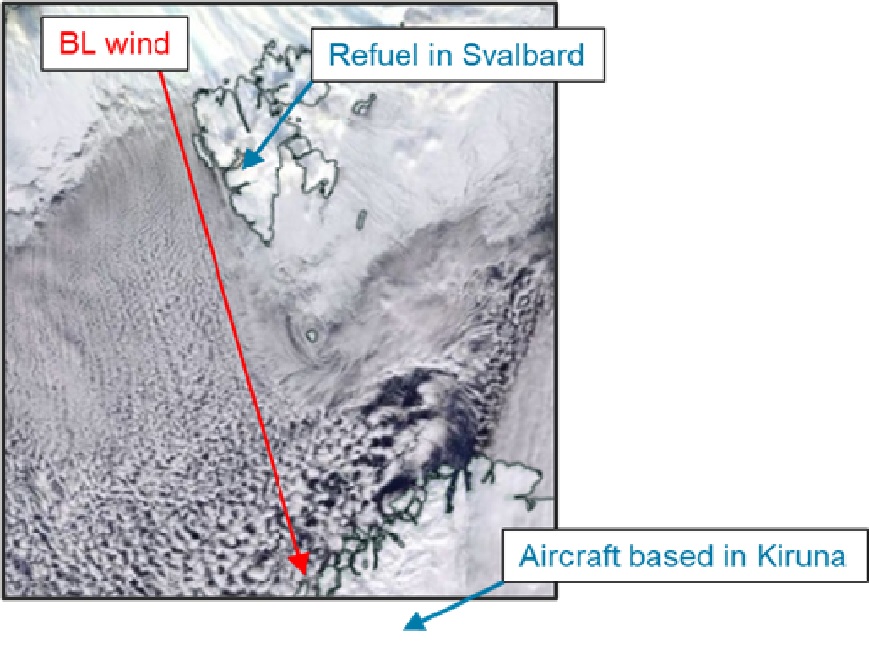 Visible satellite image of a cold-air outbreak to the east of Svalbard. The red arrow indicates the atmospheric boundary-layer (BL) wind direction.

A schematic cross-section through the cold-air outbreak flow showing the evolution of the cloud layer and the region in which the FAAM aircraft will operate.