MASOMED field and airborne campaign (Camarena, Madrid, Spain, 03-19 May 2017), funded by EUFAR Transnational Access and jointly organized by the GFZ in Germany, CIEMAT and INTA in Spain, aimed at mapping soil variability and quality related to crop stress and land management within rainfed crops based on hyperspectral imagery from the VIS-NIR to TIR (0.4-12 µm).

Indeed, inadequate management due to cultivation and land use practice within Mediterranean regions is endangering soil quality and productivity, whereas soils are an essential factor contributing to agricultural production in cereal crops, olive groves and vineyards. The MASOMED data will be used to map soil variability during the growing season and associated vegetation stress indicators using the full potential of visible, near infrared, and thermal infrared hyperspectral CASI 1500i and AHS data within a rainfed Mediterranean agroecosystem (Camarena test site, Madrid, Spain). Further, the following issues will be pursued:

Finally with a good weather and fully motivated team, successful flight acquisitions took place on Sunday, 7 May 2017, with the CASA 212-200 from INTA, Madrid, during the day with the highest sun angle with the CASI-1500i and AHS sensors, and on the following night on 8 May 2017 at the coolest time (3am) for a night acquisition with the thermal AHS sensor. Simultaneously, a large field team was gathered composed of participants from GFZ, CIEMAT, University of Almeria, Denmark Technical University, in collaboration with participants from Tel-Aviv University and the Technical University of Berlin, to acquire calibration/validation surface data around the airborne acquisition date. Additionally, a 2-man field INTA team accompanied the field MASOMED team for calibration/validation measurements during the flight campaign both for the day and night acquisition.

All airborne and field data acquired during the campaign are currently under processing by INTA and the different teams in the project. The data include 8 AHS and CASi-1500i flight lines taken during the day and 2 AHS flight lines taken during the night. Field data include 8 test sites with a total of 27 measurement plots within different crops with the following data: surface reflectance in the VNIR-SWIR, surface-leaving radiance in the TIR, temperature, LAI, fAPAR, chlorophyll, vegetation and soil samples, and field observations. 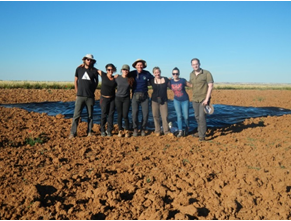 MASOMED field team by the dark calibration target, for the day overflight passes 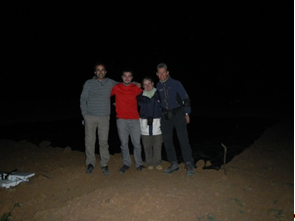 MASOMED field team by the dark calibration target, for the night overflight passes 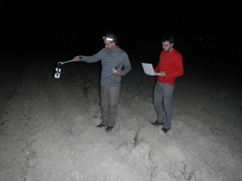 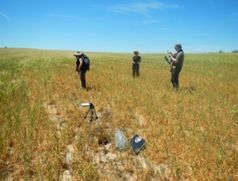 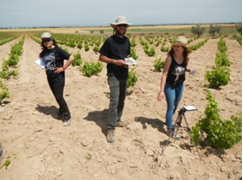 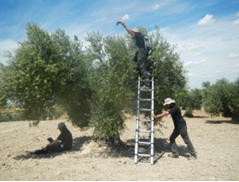