The “Atmospheric Pollution from Shipping and Oil and gas platforms of West Africa” (APSOWA) project led by LPC2E (CNRS-Université Orléans, France) in collaboration with IPA (DLR, Oberpfaffenhofen, Germany) seeks to characterise gaseous and particulate pollutants emitted by these sources off the coast of the Gulf of Guinea. The APSOWA campaign was clustered with the DACCIWA campaign, a major project funded by the European Union (FP7), with partners from Germany, France, UK, Switzerland, Ghana and Nigeria, which deployed three research aircraft (SAFIRE’s ATR-42, DLR’s Falcon-20 and NERC BAS Twin Otter). The DACCIWA research campaign in June/July 2016 undertook a range of activities ranging from airborne measurements, to running complex numerical models of the composition of the atmosphere, and APSOWA seeks to enrich the findings of DACCIWA.

The growth of the oil industry and increase in maritime traffic, and subsequently their emissions along the Guinean Coast contribute to the increase of anthropogenic emission sources. Questions regarding the interactions between those anthropogenic sources and natural emissions (e.g. biomass burning emissions also measured during the campaign) remain unanswered. This is the first time such a large campaign was performed in this region, despite its growing population and rapid economic development.

The APSOWA campaign took place from the 7 to 14 July with fully-funded flight hours on board DLR’s Falcon-20. Our French instrument SPIRIT (from CNRS-Université Orléans) was installed in the aircraft for our campaign and the rest of the DACCIWA flight campaigns. Our flight campaign consisted of 4 flights:

As an example, the flight on 10 July 2016 is presented in the following figures. During this flight, the FA20 aircraft circled a Floating Production Storage and Offloading (FPSO) oil vessel and meandered in the plume direction at 300m above sea level allowing the measurement of downwind peaks of NO2 and aerosols. Preliminary trajectory simulations by FLEXPART for NO2 release from the FPSO location can reproduce the NO2 increases and confirm the origin of the pollution. Tests still need to be conducted to effectively reproduce the intensity of all the peaks by modifying the plume injection height and/or the time period of release. Thereafter, tests will allow to quantify the emissions flux from the FPSO platform and to evaluate the current emission inventories.

Figure 1: Entire map of the aircraft trajectory on 10 July 2016, from Lomé to Lomé 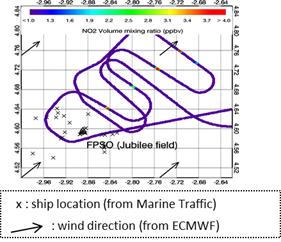 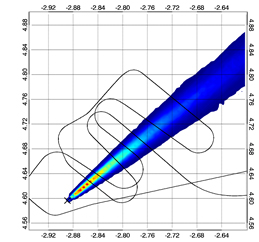 Figure 3: NO2 plume simulated by FLEXPART, in agreement with the NO2 aircraft sampling

Figure 4: NO2 peaks vs. time measured by aircraft in agreement with simulations by FLEXPART model

Next: NAWDEX - An airborne field campaign to improve jet stream forecasts over Europe

Previous: Great article on EUFAR and the future of airborne research in the EU researcher magazine

View from inside the DLR Falcon-20 cabin with the instruments in operation, APSOWA flight campaign, July 2016