It may seem bizarre that processes occurring within clouds near the USA, involving tiny ice crystals and water droplets, can have an influence on high impact weather events thousands of miles away in Europe, and our ability to predict them days in advance. However, this is the fundamental nature of the atmosphere as a chaotic dynamical system. Information is transferred from one region to another in the atmosphere through wave propagation and transport of properties within the air, such as water vapour. Weather systems developing over the North Atlantic and hitting Europe are intimately related to large-amplitude meanders of the jet stream, known as Rossby waves. Characteristic weather patterns grow in concert with the waves, and the jet stream acts as a wave guide, determining the focus of the wave activity at tropopause-level (about 10km altitude). Rossby wave energy transfers downstream rapidly, amplifying the meanders and the weather events associated with them.

From 16 September to 18 October 2016, the international experiment NAWDEX (The North Atlantic Waveguide and Downstream Impact Experiment) took place examining the jet stream and its downstream consequences for the prediction of weather across Europe. Recent research has shown that forecast busts (where skill is much lower than usual) for Europe share a common precursor 5-6 days beforehand; there is a distinct Rossby wave pattern with a more prominent ridge (northwards displacement of the jet stream) across the eastern USA. The reasons for these forecast busts are not known, but it is hypothesised that diabatic (cloud and radiative heating) processes, over the USA and Atlantic, increase the forecast uncertainty in this situation. Visit the NAWDEX website for more detail.

Four research aircraft ­– the HALO and Falcon from the German DLR, the French SAFIRE Falcon aircraft and UK FAAM BAe-146 aircraft – were equipped with lidar, radar and dropsondes for measuring high-resolution cross-sections of winds, temperature, humidity and cloud during 15 Intensive Operational Periods (IOPs). Aircraft were based from Keflavik, Iceland and the UK to intercept developing weather systems crossing the North Atlantic, while the NOAA SHOUT programme were dropping sondes into tropical cyclones near the USA east coast as they tracked into mid-latitudes. A comprehensive network of ground-based radar and lidar profiling stations ran continuously in the UK and France, plus 584 additional radiosondes were launched across northern high latitudes (40-80N) from Canada to Western Europe.

The focus of the EUFAR funded project “NAWDEX-Influence” was to fly the DLR Falcon aircraft across the jet stream using its two wind lidar instruments to measure the detailed structure of wind across the jet. The aim was also to connect the aircraft observations with continuous monitoring of the wind profile by the ST radar wind profiler on South Uist (an island to the northwest of Scotland) as well as the radiosonde launches from the UK. It is hypothesized that the sharpness of the jet stream, in terms of peak strength and width, and the associated sharpness of the tropopause adjacent to the jet, matters to Rossby wave dynamics and therefore to the accuracy of weather forecasts across Europe.

A golden opportunity emerged during the second week of the NAWDEX campaign, as tropical storm Karl moved northwards from the Bahamas and was forecast to interact with the jet stream with highly uncertain outcomes in terms of high impact weather for Europe 5-6 days later. The Global Hawk was first to the scene with a comprehensive coverage of dropsondes on the night of 22/23 September (part of the SHOUT experiment). Tropical storms move slowly and Karl was sampled again off the east coast of the USA on the 24/25 Sept. Then there was a dramatic change as Karl interacted with the jet stream on the 26th undergoing a process called “extratropical transition” when the cyclone also intensified. The German HALO aircraft was able to reach the centre of the storm during this critical stage from its base in Iceland.

Following transition, the jet stream on the southern flank of cyclone Karl became much stronger and the whole system was stretched out and advanced very rapidly towards the north of Scotland – a perfect situation for the NAWDEX-Influence goals. The DLR Falcon aircraft flew from Iceland to Torshavn (Faroe Islands) before a transect southwards across the jet stream to the South Uist radar. A major bonus was that the UK FAAM aircraft was able to join the Falcon on the same section across the jet dropping 22 sondes. This enabled us to measure static stability and humidity at high resolution in the vertical to complement the wind observations.

Above the Scottish north coast the jet maximum was observed to be 89 m/s (200 mph) which is unusually strong for the time of year and was associated with severe winds below across northern Scotland. I was lucky enough to be on the FAAM flight. So was BBC science correspondent, David Shukman, who reported on his experience on BBC TV and website. The jet streak (a locally intense section of the jet stream) moved into Norway and was followed by two days of persistent heavy rainfall and flooding as a moist air stream from the mid-Atlantic was drawn northwards to meet the jet stream on the Norwegian coast.

This is the first time that the jet stream and associated weather systems have been observed from one side of the Atlantic to the other with measurements that have high resolution coverage in altitude. It is hypothesized that the sharpness of the jet stream and the vertical structure in humidity, cloud and temperature matters to large-scale wave dynamics. The observational dataset collected during the month-long NAWDEX campaign will provide unique insight into that structure and the processes associated with the triggering, propagation and downstream impact of disturbances along the North Atlantic waveguide.

Next: Aerosol and Cloud Experiments in Eastern North Atlantic 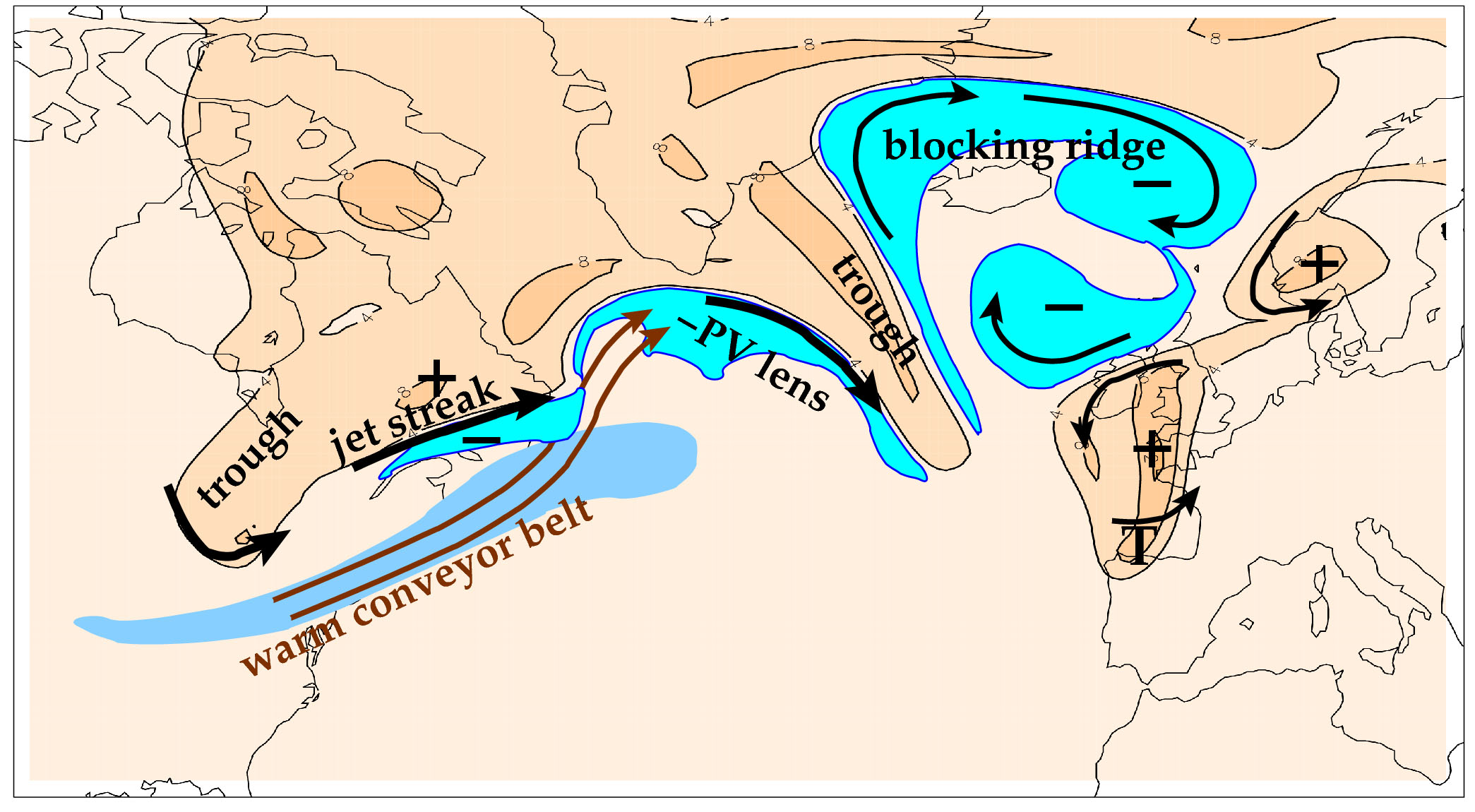